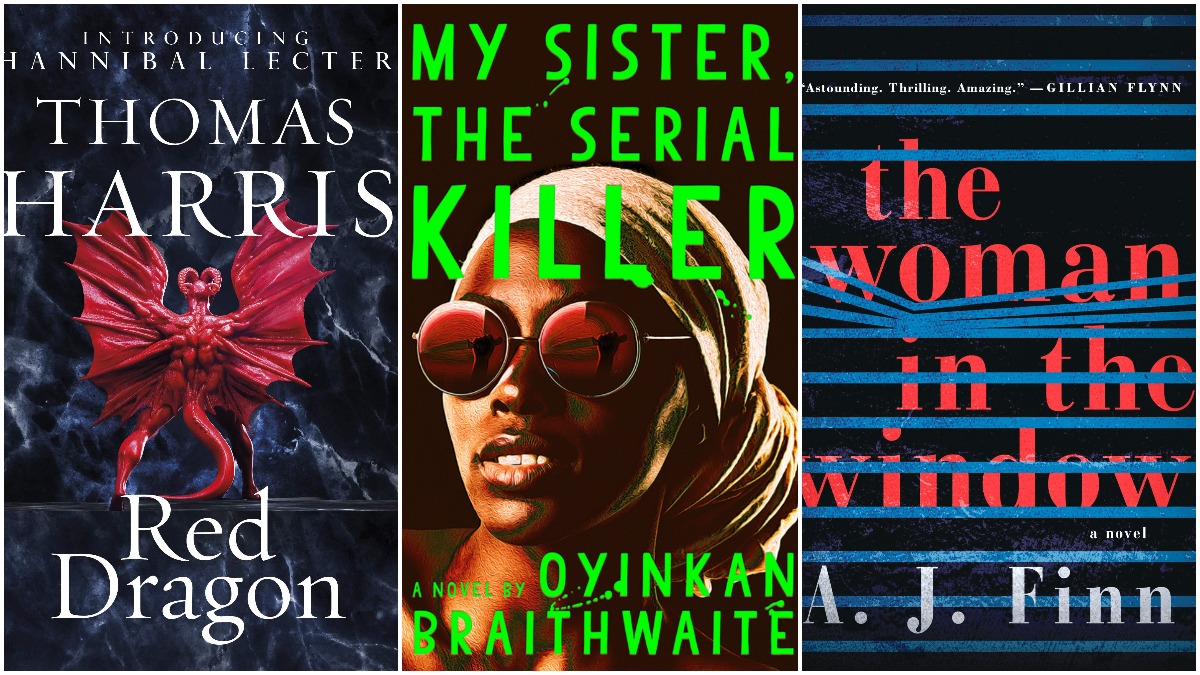 When it comes to the best psychological thriller books, you should definitely check them out without knowing much about the actual story. This can be quite difficult in a world where a lot of the best are made into movies or TV shows, but it can be really worth it if you can possibly avoid spoilers for these stories. Some of the best psychological thrillers read like horrors, with a sense of anticipation building up until the reader is sure something is going to happen at any moment. Test your nerves and discover this selection.

It’s one of the more recent books on the list, released only in 2019, but it caused quite a stir at the time of publication, and has been listed for a ton of prestigious awards such as a long list of the Booker Prize. and shortlisted for the Women’s Prize for Fiction. . Aside from the literary merits of this book, it is also a very good read.

Korede is the older sister who helped her little sister Ayoola clean up no less than three times after Ayoola murdered three boyfriends. Ayoola says it’s self defense and Korode doesn’t really think about it, until Ayoola starts dating a man Korode was in love with. Sister the Serial Killer is full of molasses black comedy and as sharp as any classic thriller you can think of.

2. And then there was none – Agatha Christie

Speaking of classics, Agatha Christie is a name that must be on a list of the best psychological thriller books. She was a master of the genre, building stories so tightly curled that by the end of the tale you are on the edge of your seat.

Ten strangers are brought to an island off the coast of Devon, and at dinner, a recording plays the voice of their mysterious host, accusing them all of hiding a guilty secret. As a storm hits the island, the guests begin to die one by one. And Then There Were None is mystery murder by definition – in fact, the best-selling mystery murder of all time – but the psychological elements of the story are evident.

Another absolute master of the genre is DaphnÃ© Du Maurier, an author who really knew how to create an atmosphere with her sets and then exploit that atmosphere for maximum frightening effect. Her Jamaica Inn is a master class when it comes to writing, but Rebecca is the true jewel in her crown when it comes to psychological thrillers.

A young woman is courted and quickly chooses to marry the enigmatic widower Maxim de Winter. He takes her to Manderley, his Cornish estate, where the new Mrs. de Winter quickly realizes that her husband – and indeed his entire household – is haunted by the memory of his first wife Rebecca and the mysterious circumstances of her death. . It’s no exaggeration to say that Rebecca is one of the best psychological thrillers of all time.

From classics to shiny and new now, AJ Finn’s debut album, The Woman In The Window, took the world of psychological thrillers by storm when it was released in 2018. It spawned a Netflix Movie since then which has, as you might expect, received very bad reviews, so better check out the book that started it all.

Anna Fox is a woman who has not left her home for ten months. She spends a lot of time watching the world go by through her window, and when the Russell family move in, she is drawn to them and how perfect they seem. One night however, Anna hears a scream and is forced to find out the truth about what she saw – but can she even trust herself?

The phenomenon that was making the buzz around Gone Girl had to start somewhere, and of course it all dates back to Gillian Flynn’s crisp and intelligent writing in one of the most popular and best psychological thriller books of recent years. . He’s a real talent, able to raise the tension to such unbearable levels that even a reader needs to take a break to catch his breath.

On the morning of his fifth wedding anniversary, Nick Dunne’s wife, Amy, went missing. Police suspect Nick and Amy’s friends of confirming that she was afraid of her husband. Nick denies it, but the evidence starts to mount against him and we are drawn into a story where absolutely nothing can be taken at face value, and nothing is quite what it seems.

The Hannibal Lecter series is four books long, and thanks to the way the films – especially The Silence of the Lambs – have been absorbed into pop culture, we think we know the Hannibal Lecter story. But if you don’t read the books, you’re missing out on serious writing – Harris really knows his stuff.

Red Dragon, the chronologically second book in the Hannibal Lecter series, is the original novel and the one that started the entire Lecter legend. Will Graham was an extraordinary profiler until he injured himself while capturing Dr. Hannibal Lecter. When a new serial killer appears, Graham realizes that he needs Lecter’s brilliant mind to help him capture the killer. So we’re introduced to Dr. Lecter, one of the greatest characters of all time, and an expert manipulator.

If you like your psychological thrillers to have more than a touch of the ghoulish about them, then Out is probably the book for you. This is certainly not a read for the faint hearted. Published in Japan in 1997, it was translated into English in 2004 and was very well received. Kirino is a big name in police writing in Japan, and it’s not hard to see why.

Out follows four women who work nights at a lunch box factory, packing bento boxes. Each of them has a difficult family life, full of problems with their families. When one of the women cracks and murders her abusive husband, the women band together to get rid of the body – which is good, until the body parts start to appear and the women start to turn around. against others.

No list of the best psychological thriller books is complete without Stephen King, and of course that book has to be Misery, his suspenseful masterpiece of writing. Like Hannibal Lecter, Misery is so firmly established that we think we already know the story, but if you haven’t had a chance to check out the original novel, I recommend you read it.

Paul Sheldon, a popular author, is seriously injured in a car accident and taken to the home of Annie Wilkes, who cares for him and gives him painkillers. As Paul realizes he’s a prisoner in her house, he comes to understand that Annie is a psychotic fan of his work, intending to force Paul to resurrect a character he killed in his latest novel. .

Lisa Jewell is a big name when it comes to modern psychological thrillers and almost any of her novels could have been on this list. The Family Upstairs is a fast paced, dark and twisted affair with a plot that unfolds at high speed, leaving any reader a little breathless with anticipation.

In a Chelsea home, a well-fed and happy baby wakes up in his crib, waiting to be picked up. But the only other occupants of the house are three decaying bodies that have been dead for some time. Someone took care of the baby, but they’re gone now. What happened to them? And why was the baby left alone?

10. The Girl with the Dragon Tattoo – Stieg Larsson

Stieg Larsson’s Millennium Trilogy is a Swedish detective story genre work, published posthumously after the author’s tragically early death in 2004. In 2008, Larsson was the second best-selling author in the world thanks to his Millennium trilogy. , and of course it all started with The Girl With The Dragon Tattoo.

Lisbeth Salander is the greatest creation of Larsson, a tattooed hacker hired alongside disgraced journalist Mikael Blomkvist to solve a forty-year-old mystery. Harriet Vanger disappeared from a gathering on an island owned by her family, and her uncle is still convinced that a family member killed her. Salander and Blomkvist are about to find out how far the rich and powerful Vangers will go to protect themselves.

Dennis Lehane is a prolific author, with over a dozen novels to his credit. A lot of them are from the Kenzie and Gennaro series, but Shutter Island is one of his standalone novels, and a very good one. Lehane writes with an old-school, harsh vibe that is completely captivating from start to finish.

Shutter Island follows U.S. Marshal Teddy Daniels as he tracks down an escaped killer at Ashecliffe Hospital for Insane Criminals on Shutter Island. A hurricane is heading towards the island and Teddy uncovers more mystery than he expected, cryptic clues to a woman escaping from a locked room. Someone is trying to drive Teddy crazy, and the closer he gets to the truth, the harder it is to see exactly what he’s looking for.

Another more recent entry for the list, it would come as a surprise if The Silent Patient weren’t chosen for future best psychological thriller book lists – Michaelides’ debut really is something special. If you are a huge fan of the endings in your thrillers, then this is definitely the book for you.

Theo Faber is a psychotherapist tasked with finding out why Alice Berenson, a woman with a seemingly perfect life, shot her husband five times. She hasn’t said a single word since that day, and Theo is obsessed with getting her to talk and unraveling the mystery of it all. But the search for the truth threatens to consume him.

READ NEXT: 10 best fantasy book series of all time

Some of the coverage you find on Cultured Vultures contains affiliate links, which provide us with small commissions based on purchases made while visiting our site. We cover game news, movie reviews, wrestling and much more.

The best mystery and thriller books for this fall 2022