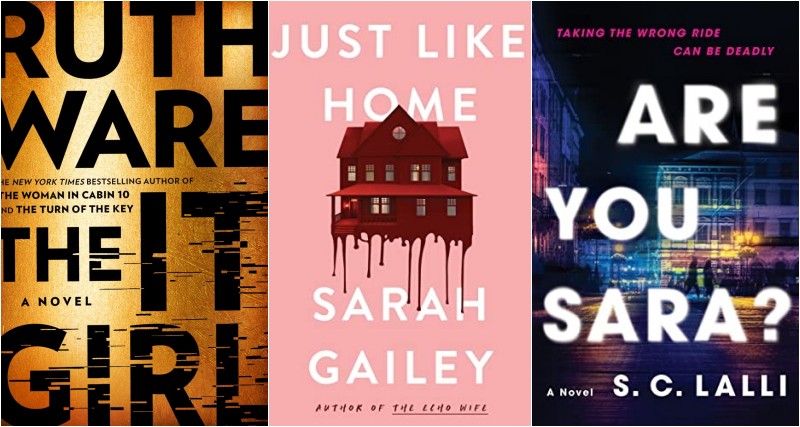 Summer is the most delightfully slow season, from long days at the beach (or pool) to sweet al fresco drinks after the sun goes down. That’s why it pairs so well with thrillers and mysteries – they go to such a quick clip, and you often have more time to read, that it’s like a summer reading wormhole.

That’s why we’ve spaced out these propulsive and captivating summer reads; some are out now, while others will be waiting for you as the season progresses. And the thrills vary, from serial killers to child stars and fake purse rings to art heists (all hugs!) and secret affairs to mistakenly-identity carpools. Some (Portrait of a thief and Counterfeit) already have TV offerings on the way, but these books are so cinematic in themselves that you don’t want to miss them.

Remember those tongue-in-cheek tweets about how Oscar Isaac should play a rebooted Indiana Jones whose archaeological quests involve returning museum artifacts to the cultures they were stolen from? As the internet debated whether or not an existing franchise could pull off such an ambitious reversal, Li wrote an original heist about a team of Chinese-American college students stealing what the West took while considering their own complicated dual identities.

Yet there is a moment in its dynamic debut when the quintet of self-taught art thieves sit down to watch Ocean’s Eleven and taking notes – the kind of self-awareness I like to see in stories like these.

The premise of Janelle Brown’s latest thriller sounds like particularly juicy celebrity gossip, or the kind of plot you’d hear on an in-depth podcast: identical twins Samantha and Elli spend their childhood and teenage years on the TV screen, often inhabiting the same role until they are basically one person. But after drug addiction through a failed career (Sam) and the decision to turn away from Hollywood (Elli) drive a wedge between them as adults, the only thing that could possibly bring them together is the Elli’s bizarre disappearance.

After the would-be golden twin flees to a spa in Ojai but leaves behind her newly adopted two-year-old, Sam, who has been sober for a year, must step out of his twin’s shadow…and, hopefully, fulfill the title with a nostalgic imitation. At the very least, each twin tells half the story of their life together, telling it better than any journalist or podcaster.


Release date: May 10 from Berkley

I tried to scratch the mexican gothic itching since Silvia Moreno-Garcia’s ending on gothic horror, but what thrills me The Hacienda this is how he also riffs on another distinctive classic of the subgenre. Set in the aftermath of the Mexican War of Independence, Cañas’ early days have ghostly echoes of Daphne du Maurier Rebeccaas part-mestizo, Beatriz Hernandez seeks a husband in order to marry a lower caste and support her widowed mother.

But despite the charming widower Don Rodolfo Solórzano, Beatriz finds that her new husband’s house is less in love with her: spooky sounds and mysterious events torment her nightmares and waking hours. So do his dismissive house staff, except for half-breed Padre Andrés, the only one willing to help him get rid of this haunted house by way of exorcism. just like mexican gothicthe supernatural seems to come second to the horrors of colonialism and racism.


Release date: May 17 from Berkley

May Cobb continues her dark debut hunting women with another scintillating tale of neighborhood intrigue in a Northeast Texas town, this time through a trio of girlfriends and a shared obsession. Jen is back in her teenage neighborhood after a nasty divorce; Cynthia fidgets in her seemingly perfect marriage; and Kitty is too busy with her own secrets to be there for others. But when the handsome Will Harding settles in the most legendary house in the neighborhood belonging to an old widower, the young bachelor stirs up the desire of the three wives and mothers of soon to be forty years old.

But while each of the women would no doubt toast each other for a midlife crisis affair, when all three want the same man, it’s more cause for manipulation than celebration, as many secrets start to come to light. find at the service.


Counterfeit is one of those books I’ve been dying to get my hands on ever since I saw the Publishers Marketplace ad with the compelling premise: 40-something Chinese-American lawyer Ava Wong, struggling both in her career, her marriage and her role as a mother, is dazzled When her former college roommate, Winnie Fang, returns to her life, the nerd has transformed into a sophisticated jetsetter.

His secret? A counterfeit luxury handbag scheme that needs someone as well dressed as Ava on the western side of things. But when Winnie disappears and leaves Ava holding the bag, has she been tricked? Again, wait until you read half of Winnie’s story and find out what’s true about Ava and what’s a convincing fake.

Ruth Ware’s taut whodunits range from lavish cruise ships and ski lodges to creaky old houses, but the recurring theme throughout her work is the dark knots that bind even the seemingly closest friendships. The eponymous It girl in her latest is April Clarke-Cliveden, a magnetic undergraduate who attracts the shy Hannah Jones during their first term at Oxford. But she also attracts the wrong kind of attention, ending up murdered before the end of the year.

It’s not until a decade later, when Hannah and fellow Oxford pal Will are expecting their first child, that April’s alleged killer dies in prison…and a reporter comes up with the shocking theory that he may not have killed her after all. You know where this is taking us – it feels like a dark college tale of a group of classmates who may know more than they let on about the tragic fate of one of their own. Then again, though, being a mystery ware, we really don’t know what corners she’ll turn, especially riffing on a popular subgenre.

Sarah Gailey has deftly weaved suspense into sci-fi and fantasy, from their magic school murder mystery magic for liars to last year’s clone thriller The Echo Woman. Their latest taps deeper into that open vein of family trauma through another heroine who would rather exhume her skeletons than stuff them in a closet. But Vera may have the ultimate reason to dread returning to Crowder House, her childhood home: her father was a serial killer whose bodies were literally the foundation of their lives. Worse yet, a performance artist with an inexplicable claim to her father’s dark legacy has moved into the guesthouse and recounts his narrative.

When handwritten notes from her father appear in the house, Vera doesn’t know if it’s worse to imagine the artist playing her father or the alternative. I love a thriller that engages with today’s true-crime craze, especially when it appeals to us readers for our morbid fascination.

We’ve all (drunk or impatiently) hopped on the wrong Uber or Lyft, but the worst consequence in real life is a brief embarrassment from inadvertently stealing someone else’s rideshare. But in SC Lalli’s latest thriller, when Saraswati “Sara” Badhuri accidentally catches Sarah Ellis’ ride in the wealthy side of town, her return to her humbler side of the tracks reveals the dead body of her new friend and twin.

A law student and part-time bartender, Sara has no idea which of them was the supposed target, but the alternating chapters told by the dead Sarah will slowly determine whether their encounter was entirely random or whether they have more in common. common than just a name. It will make you think twice the next time a car arrives to take you from drinking day to your next summer adventure.


Natalie Zutter is a Brooklyn-based playwright and pop culture critic whose work has appeared on Tor.com, NPR Books, Den of Geek and elsewhere. Find her on Twitter @nataliezutter.