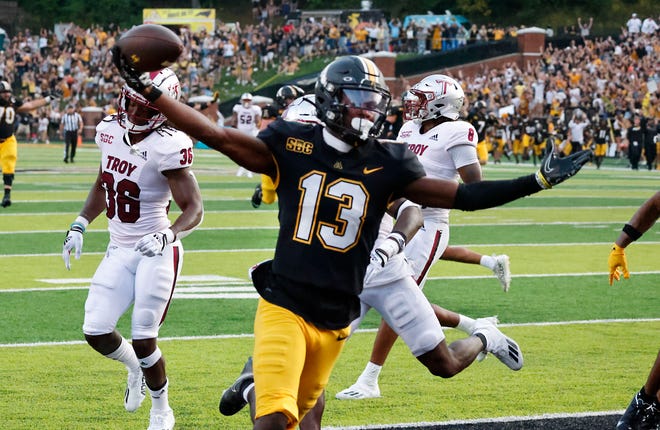 The college football report card is moving forward and this week has been filled with questionable plays, more payouts for non-Power Five schools, and some thrilling finishes.

The same goes for the standings as last season. High marks will only be for show, and failing marks have no chance of being reversed.

Last week, the highest marks went to the Sun Belt Conference, whose schools collected millions of programs they thought they could easily win, and the lowest marks went to the ridiculous amount of flags that were thrown and not knowing how to dress in wet clothes. climates for the southern Mississippi coach.

Without further ado, here’s the Week 3 analysis on how the fans, teams, players and coaches fared:

WELCOME TO THE HOUSE: Manti Te’o makes his first appearance at the Notre Dame game

Doing anything to get the attention of officials is just generally a bad idea. Most players do everything they can to draw attention to themselves and sometimes it’s to their deterrent. Which brings us to the Boilermakers at Purdue University.

They took a 29-25 lead on a 12-yard touchdown pass with 51 seconds left on the road against Syracuse. Then came the debacle.

Two unsportsmanlike conduct penalties, one on tight end Payne Durham, who caught the touchdown pass, on the successful extra run try and another on head coach Jeff Brohm, forced Purdue to give the kick off from his own 10-yard line.

The practice that followed Syracuse started from the 50-yard line. Then Garrett Shrader hit Oronde Gadsden for 25 yards with 7 seconds left for the winning score. It was the only completed pass on the drive after Purdue was flagged for defensive holding and pass interference to keep Syracuse’s hopes alive.

And after two more unsportsmanlike conduct penalties against Purdue, Syracuse kicked off the Purdue 35 meter line. Game over.

I messed up and found out :F

This week at Christmas

Given that the teams have been very generous and that the holiday season is far from approaching, the Bulletin must highlight the institutions which have been in the spirit of generosity and which appear on Santa’s nice list this year.

Nebraska couldn’t wait three weeks to save $7 million after firing Scott Frost and reducing his buyout. Big Ten West compadre Northwestern played the victim this week against Southern Illinois and so the Salukis came back to Carbondale with a big win and a $550,000 direct deposit.

The Eastern Michigan stock was full thanks to Arizona State, as the Sun Devils filled it to the brim with $1.5 million. The Eagles then came away with a 30-21 win at Tempe and trolled coach Herm Edwards in the process.

They played to win the game: A

Appalachian State, armed with millions from Texas A&M and a visit from College GameDay, rewarded its fans with an absolute thriller against Troy. Trailing 28-26 on a fourth-and-10 with two seconds left in the game, quarterback Chase Brice rolled left under pressure and threw a 53-yard bomb downfield that was deflected and fell into the arms of the wide receiver Christan Horn at the 5-yard line.

Horn then took the ball to the right and ran snatching victory from the jaws of defeat and sparking a boisterous celebration at Boone.

I’ll keep this one short. A blow of desperation late in the first half of the Indiana-Western Kentucky game turned into a victory for the goal post as several players ran into it trying to defend the Hail Mary, leaving the post shake after the collision. Fortunately, no one was seriously injured during the game.

0 – Touchdown passes for Florida and South Florida, which have played three games each and are the only teams in the country without one. It’s also the number of rushing touchdowns Colorado State has in three games.

1 – Touchdowns Georgia have given up in their first three games.

5 – Touchdowns on 12 carries Michigan running back Blake Corum had against Connecticut.

14 – Percentage of third down conversions Old Dominion have converted this season.

27 – Number of first downs won by Miami against Texas A&M. The Hurricanes failed to score an offensive touchdown in the 17-9 loss.

The best and the worst of the rest

The worst false field goal attempt of this century: expulsion.

Appalachian State fans showed up at College GameDay with their signs.

Here for the pettiness: A

Dog of the week: Duquesne in Hawaii

This lovely dog ​​took advantage of the weather delays and enjoyed a late night game in Iowa.

Now on to the game: For the Duquesne football team, a chance to get out of Pittsburgh and take a trip to Hawaii to soak up the fun and the sun must be an experience to remember. The administration will take the $215,000 paycheck and move forward in paying expenses, and to be honest, in today’s big-money college football, that payday feels a little small.

The reason for the puppies’ disdain in this one is the late start time (11:59 p.m. ET) and the actual teams playing on the field. Duquesne is from the FCS Northeast Conference and Hawaii is battling for the worst program west of the Mississippi, and possibly in all of college football.