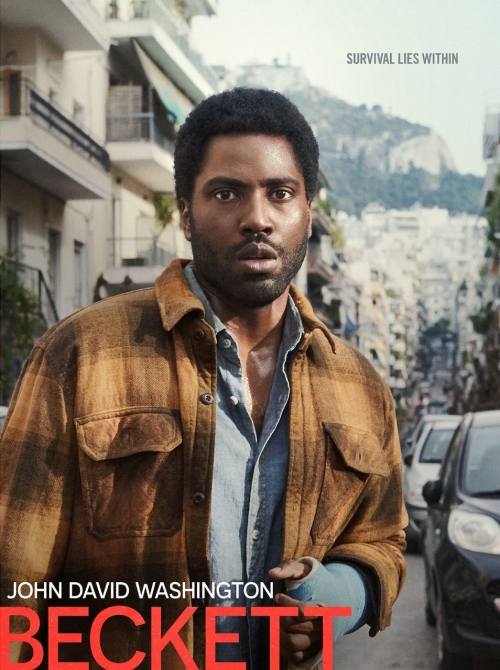 “Beckett” is an action-packed thriller set against a political backdrop in Greece. This is an ordinary man in the wrong place at the wrong time.

John David Washington in the lead role is the unlucky protagonist caught in an extraordinary storyline. While on vacation in a remote hilly area of ​​Greece with his girlfriend April (Alicia Vikander), his car skids and lands on the roof of a house. The accident kills his girlfriend immediately and just before he can pass out, in his distressed state, he sees a young boy being taken off the site by a woman.

He later wakes up in a hospital and while telling the details of the accident to the police, much to his surprise, he learns that the house he and April crashed into was an abandoned house. He later revisits the crash site only to be shot by armed people, including the policeman who was supposedly helping him.

Caught off guard, he runs for his life. In the process, he breaks his arm and is injured by a gunshot. In his desperate attempt, he decides to contact the American Embassy to seek protection, only to be told that help could not reach him until a day later.

To speed up the process, Beckett decides to travel from the top of the mountain to the embassy in Athens. Along the way, he realizes that the boy he saw at the crash site has been kidnapped for a political agenda. As a result, her life and the lives of several people who help her on her journey are also in danger.

It is during the second act of the film, which is the cat and mouse chase between the policeman and Beckett, that we realize that the film is set against the backdrop of the anti-austerity movement in Greece which involved a series of protests. and general strikes.

The plot of the film may seem simple without any gimmicks, dramatic visuals or overdone stunts, the narrative is fluid and gripping. That doesn’t give you time to think about how Beckett went from a victim of a horrific accident, to a fugitive on the run, to an unwitting hero. You are drawn with him on his journey.

Watching an injured Beckett make his way through the streets and into people’s hearts despite his lack of language skills is what prompts you to support him. The action scenes in which he fights his pursuers in rustic survival attempts are what makes him the underdog to be applauded.

Alicia Vikander, in a cute romantic role as April, leaves her impression that lasts until the end. Yes, you remember her being there in the final act when the camera focuses on Beckett’s palm where you see the heart she drew.

Vicky Krieps, playing a random political activist, is charming but spoiled in this film. His interactions with Washington, although human, do not have the weight of a great artist.

Director Ferdinando Cito Filomarino and his cinematographer, Sayombhu Mukdeeprom, creatively edited the film. Each image brilliantly captures the tiny but intrinsic elements of the story.

Overall, Beckett is a straightforward but awesome thriller.

(Troy Ribeiro can be contacted on [email protected]) (IANS 2 months ago) https://www.newkerala.com/hollywood-news.php