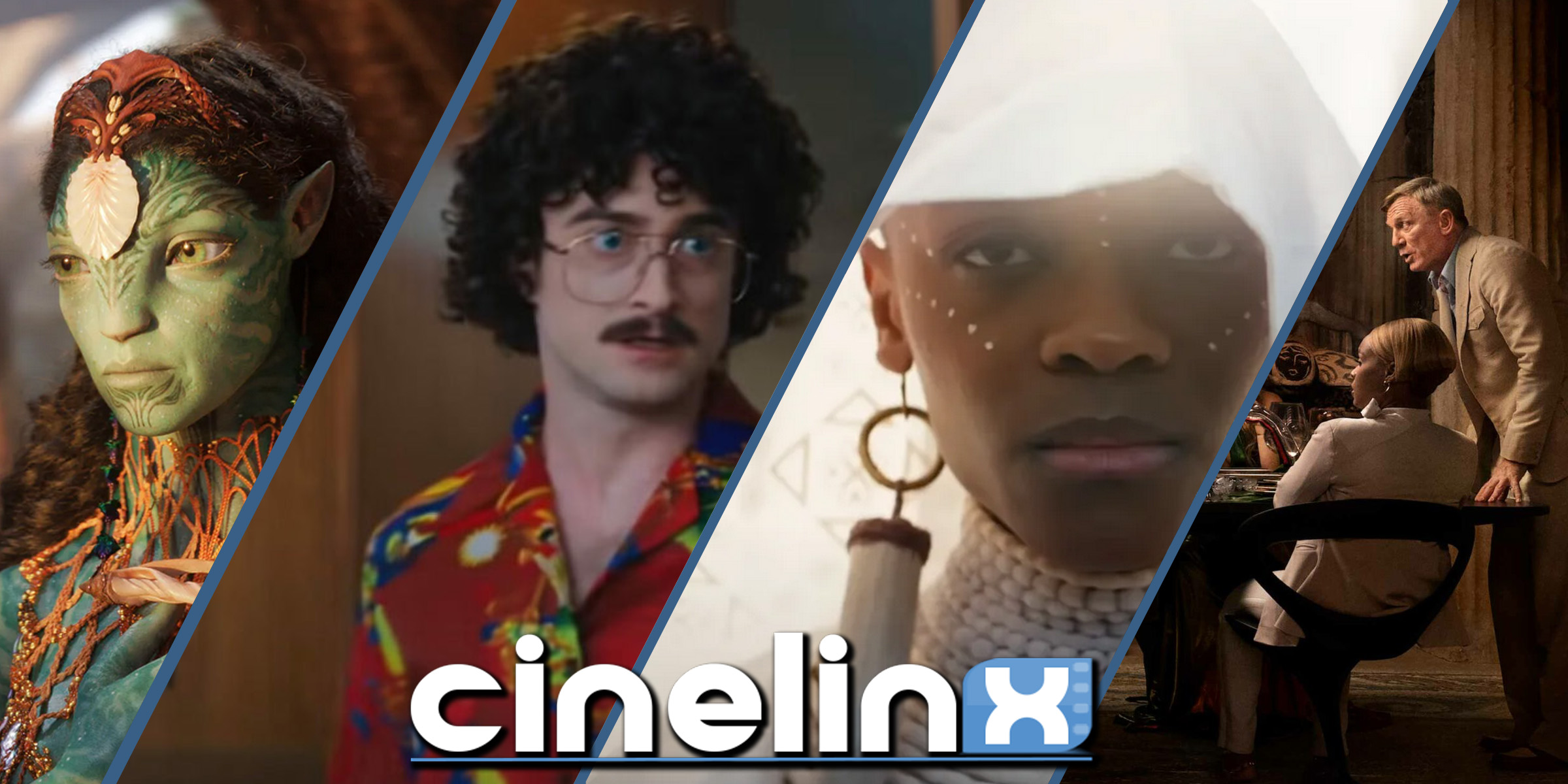 As summer draws to a close, our team takes a look at the rest of the movies coming in 2022. Here, we discuss our top five picks!

It’s September, and that means the start of fall movie season (though we’re still waiting for the summer heat to give us a break). From blockbusters, family films to Oscar contenders, the final months of the year are almost always filled with movies for everyone to enjoy.

As we’ve done for the past few years, we’ve tasked some of our staff with picking the movies they’re most looking forward to seeing for the rest of the year: Avatar: The Way of the Water – I shamelessly adore James Cameron’s Avatar. It’s a movie in (semi) regular rotation for me. I know it’s not for everyone, and over the years it’s become somewhat popular to hate… But folks, a movie doesn’t become the highest-grossing movie of all time, while establishing the record for the fastest movie to $1 billion without many people taking advantage of it. Either way, I can’t wait to finally get back to Pandora and see if Cameron can find that magic again.

Black Panther: Wakanda Forever – I was already looking forward to seeing the Black Panther sequel, not only because it’s a Marvel movie, but I’m really curious to see how they are going. Based on that ridiculously impressive first trailer, my hype has reached dangerous levels. Their handling of the tragic passing of Chadwick Boseman is respectful and I’m already dreading the amount of tissues I’m going to need to get through this.

Halloween ends – The Halloween reboot movies have been pretty darn awesome. The first in 2018 is almost a blueprint for how horror reboots should be handled. While not everyone was so thrilled with Halloween Kills, I enjoyed it for the gnarly kills and overall story expansion. I can’t wait to see if these filmmakers can hold the landing with this trilogy. The trailer was damn awesome, so let’s keep our fingers crossed!

The female king – I know the wait for this one isn’t very long now, but The Woman King absolutely deserves a spot on this list. From the first images, this movie caught my attention, and the trailer continues to impress. I’ve seen it many times, but recently caught it in theaters on the big screen and got chills the whole time.

Pinocchio by Guillermo del Toro – I’ll be the first to tell people, I’m not necessarily a big fan of the Pinocchio story. I’ve seen all kinds of versions of it, but none really work for me. That said, I LOVE Guillermo del Toro and I LOVE stop-motion animation. Combining the two together, bringing a unique style/flair, led me to give this version of the story a watch. The Banshees of Inisherin – The last time director Martin McDonough reunited with Colin Ferrell and Brendan Gleeson (In Brugge), it was spectacular. Since then, the director known for his charming black comedies has stepped out of his comfort zone (Three billboards outside of Ebbing, Missouri), and THAT movie was great too. I’m very excited to see what he does next. This one feels more like a return to his roots, but will definitely incorporate everything he’s added to his craft since then. Add rising star Barry Keoghan into the mix and you have all the ingredients for an entertaining, impactful and unique film.

Black Panther: Wakanda Forever – Everyone is interested to see how Ryan Coogler, the director of one of the most heralded Marvel movies to date, continues without Chadwick Boseman for the sequel. I’m intrigued to see how it not only builds on what it’s achieved so far, but whether the film surpasses its predecessor. They could have easily said they weren’t going to do another one, but they did. It’s a very difficult task, but Coogler is an incredible talent and I can’t wait to see what he and his team can do.

Avatar: The Way of the Water – Ah yes, the sequel we’ve been waiting for 10 years, but no one seems really excited. For my part, I am intrigued. Maybe not excited, but interested enough. First off, I’m a huge James Cameron fan and will pay to see anything he deems worthy of attaching his name to. But second, and most importantly, Cameron has held this position before. In fact, all of his films felt like they had some sort of general suspicion towards them before they were released, only to become huge, massive hits. I want to see how he outdoes himself again.

Babylon – Speaking of directors whose movies have been nothing but fantastic, Damien Chazelle has a new movie coming out starring Margot Robbie and Brad Pitt. But more than a stellar cast and director, the premise of this movie is what REALLY excites me. It will be a period drama set in Hollywood as the film industry grapples with the transition from silent films, something that has always fascinated me. With so many movies obsessed with Hollywood’s Golden Age or the 60s/70s, I can’t wait to see this period displayed on the big screen.

amsterdam – David O. Russel’s star has lost a bit of its shine over the years, but I’m still interested in his work. I’m a big fan of historical dramas and mysteries, and this movie seems to be both. I also love classic noir, and the 1930s setting of this movie puts it right in the middle of that time period and I want to see how the movie incorporates those elements. Add an incredible cast (as usual for Russel films) and you have something intriguing on many levels. Don’t worry darling – Of all the movies coming out this fall, don’t worry darling is one of the films that intrigues me the most. I’ve been a big fan of Florence Pugh ever since I saw her in Midsommar and I can’t wait to see what she brings to the table with this story. Every time I see the trailers for this movie I feel like there’s a big secret hidden in plain sight and I’m curious to see what that secret is.

Halloween ends – After the bomb thrown at the end of halloween killsI can’t wait to see how the story that started in 2018 ends with Halloween ends. While I still think the original movie is the best, I love how Michael Myers and Laurie Strode’s story has been rebooted and reworked. I’m also very interested in seeing this movie because I’m not entirely convinced that the story is going to have a “happy” ending, it’s the world of Halloween after all.

The menu – I first saw the trailer for The menu a few months ago and ever since, I have been intrigued by the film. It follows a young couple who travel to a remote location to dine at an obscenely exclusive restaurant where it’s very clear there’s something wrong with the chef or the kitchen. While I’m pretty sure I know what the twist is, the story seems intriguing enough that I want to check it out anyway.

Black Adam – I confess that I’m a sucker for just about any movie that Dwayne “The Rock” Johnson is in. I don’t know much about the character black adambut the trailers look really cool and maybe that’s enough for me to give the DCEU another look.

Puss in Boots: The Last Wish – Puss in Boots is one of my favorite characters Shrek sequels, so naturally I’m very interested in seeing Puss in Boots: The Last Wish, which sees the swaggering cat in a predicament as it reaches the last of its nine lives. Puss ends up embarking on one last adventure when he finds himself being chased by Goldilocks and the Three Bears crime family (yes, really). It looks like a really fun movie and I can’t wait to see it. Clerk III – Kevin Smith’s film is not perfect. But what is clear to me, as someone who has reviewed the View Askew-niverse movies in preparation for Clerk III, is that he loves his characters and can generally write an entertaining and never boring movie about people talking around them. Her love for Dante and Randall (the protagonists of Clerks franchise) is pretty infectious and I can’t wait to pull out my “I’m not even supposed to be here today” counter and see where they go next!

triangle of sadness – I don’t know much about this movie because I refuse to watch the trailer for everything to be a surprise. What I do know is that it’s an upper-class black comic satire that’s unsettling, disturbing and perhaps hard to watch at times and won the Palme d’Or at Cannes in 2022. Sign . Me. At the top.

Bizarre: the story of Al Yankovic – I’ve loved Weird Al for as long as I can remember. I finally got to see him in concert for the first time this year and it was fantastic. I usually don’t like biopics, but this one seems to be, in Weird Al fashion, a parody of the biopic and will have a lot of fun with the format. Plus, these days, Daniel Radcliffe barely signs for anything that doesn’t really take big risks and swing for the fences.

women who talk – Sarah Polley directs this film which could well be the complete opposite of another film on my list, Clerk III. Although I might take the title too literally. This has an incredible cast list including Rooney Mara, Claire Foy, Jessie Buckley and more and appears to be about a group of women in a religious colony discussing what to do when given a choice between forgiving the men who violated or be excommunicated and therefore lose heaven. It promises to be poignant and moving.

Blond – I don’t know if the September release date for this first Netflix has changed, but I’m very interested in seeing this film adaptation of Joyce Carol Oates’ fictional novel, Blond, loosely based on Marilyn Monroe. I have almost finished reading the novel and it is raw and poetic. It’s not a biopic but a work of art in its own right. I think Marilyn would be just as intrigued as we are.

don’t worry darling – Even though it’s one of my pet peeves that everyone seems to worship Harry Styles (I know, it’s stupid of me), I love Florence Pugh and I think everything she touches pays off. She seems like such a dedicated, talented and hard worker; I really admire him. Also, on a more superficial level, I love the vintage setting and costumes paired with thriller themes for this movie. Fun and scary. I hope it will not disappoint you.

Bizarre: the story of Al Yankovic “Whatever I feel for Harry Styles, know that I feel the opposite for Daniel Radcliffe. I love Dan Radcliffe’s activities. He throws caution to the wind, dances to the beat of his own drum, and takes crazy, wonderful risks. I’ll be waving the Dan flag high and can’t wait to see this.

Hocus Pocus 2: Hocus Pocus is obviously on the Halloween watch list every year, and I expect Hocus Pocus 2 will join him soon. While I don’t think the sequel will quite live up to the first movie, how can you not be thrilled to see three of our favorite witches reunited all these years later?!

The menu: Because Anya Taylor-Joy. My eyes have been on her since The Queen’s Gambit. Ralph Fiennes is also a bonus.

There’s no shortage of great movies to watch in recent months (both on the big screen and at home). What movies are you most looking forward to seeing?

Have you seen Copycat or an underrated thriller?