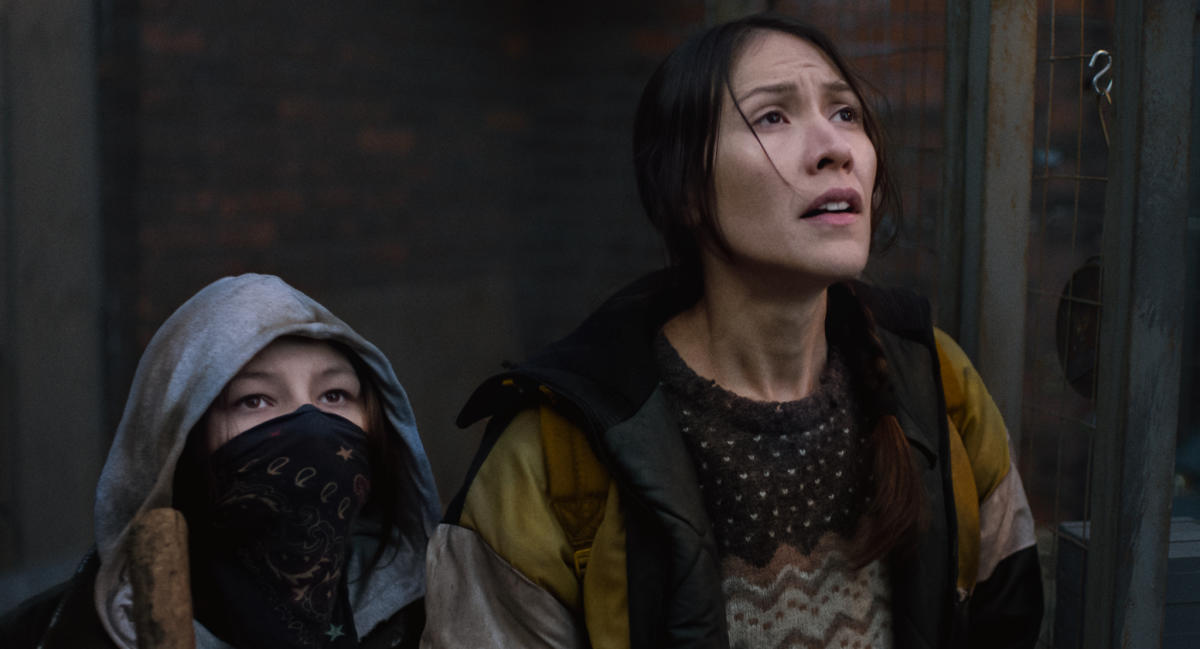 Canadians now have the chance to see Danis Goulet’s brilliant and impactful film, night raiders (executive produced by Taika Waititi), the biggest production budget ever for an Indigenous film in Canada with the record for the widest theatrical opening for an Indigenous Canadian filmmaker, which opened Friday in 80 locations across the country.

The film is an Indigenous sci-fi thriller set in the year 2043. The children are state property and Cree mother Niska (Elle-Máijá Tailfeathers) is desperate to protect her daughter Waseese (Brooklyn Letexier-Hart) in joining a group of vigilantes. to infiltrate Emerson State Schools to recapture these children.

“Getting into the genre opened up so many possibilities for me, as a storyteller, that I felt compelled to stay in that space,” the filmmaker said. Yahoo Canada. “All of my work explores the impact of colonization on Indigenous families.”

“One of the greatest systems in place to fracture and erase Indigenous cultures was the residential school system, which was in place for seven generations of Indigenous families. I really wanted to talk about it because I felt like it wasn’t part of the conversation nationally, like it should be.

While night raiders tackles the real policies inflicted on Canada’s Indigenous people, including the residential school system that tore Indigenous families apart, the filmmaker said bringing these issues into genre cinema provided a “new entry point to understand these policies.

“It’s so easy to get tired because it’s such a difficult thing to deal with and I think we shouldn’t underestimate how deep it is and what a process it is to assimilate the truth. “, said Goulet. “I think we’re still in that process.”

“For me, genre comes from offering a way in, which invites the audience to come in, and then hopefully through the telling of the story they understand the impact, the real impact on the human beings, and what it’s like to be abducted when families are fractured.”

Goulet was also inspired by the “resilience” of indigenous communities, particularly the youth and women of these communities. But it was actually an interview the filmmaker was watching with a youngster who said he was “tired of having to be resilient” that really resonated with Goulet.

“We are fighting so that future generations don’t have to be as resilient as those of the past had to be and in a way that has been reflected in history,” she said. . “Niska is just hardened by her resilience, she’s been living in survival mode for so long and her protection has actually meant that Waseese, her daughter, is able to have an openness to the world thanks to her mother’s fierce protection.”

We hope we don’t have to be so resilient, as much as I want to celebrate how strong people have been.Danis Goulet

“A great spirit of collaboration between indigenous peoples”

For the star of the film Elle-Máijá Tailfeathers (quantum of blood, The body remembers when the world opened up), she was thrilled to be working on a project with Goulet, her friend and mentor, but also felt “the enormous responsibility” to do justice to Goulet’s story.

“To me, she represents so many Indigenous women I know within our communities and I wanted to honor their experiences in the best way possible,” Tailfeathers said. “So it was a huge undertaking and responsibility, and I just felt like it was a story that our communities needed.”

“[Goulet] gave me this massive story for Niska. She built this whole story of the world we existed in, there was this timeline that went back 40 years or so and then 40 years into the future. I felt like she was welcoming me into this world that she had built in a way that I had never really experienced with any other director.

As for collaborating with Goulet, Tailfeathers added that there was also room for her to build a relationship with Brooklyn Letexier-Hart (burden of truth), who plays Niska’s daughter, Waseese, creating a “sense of safety and comfort” for them to work together.

“There was also this very powerful aspect of co-production with Canada and New Zealand and so we had all these Maori involved,” Tailfeathers pointed out. “There was this really nice spirit of collaboration between Indigenous people in a creative capacity.”

“As an actor sometimes you have to go to these very dark places and Niska’s experiences are similar to mine, and I think a lot of Indigenous people, we can all relate to some level because of this story that we embody. I felt safe and supported in a way very specific to being in Indigenous spaces.

For director and screenwriter Goulet, the most important thing was to create a space where everyone on set felt “protected” to get the job done.

“I know that all actors bring their own lived experience to what they do and it’s difficult, but I think in an Indigenous context and in the face of something that has had such a profound impact on our communities, the protection is the most important thing,” she explained.

For example, the Indigenous Screen Office funded a mentorship program, which allowed the production to have a greater Indigenous presence on set.

“A few days before the shoot, I had a meeting with all the mentees who were hired on this one and I just said, ‘Thank you, your presence here is going to help me do what I gotta do “”, Gully shared.

“No one wants to walk into these spaces and be the only one and it’s that collective spirit, I think, that gave us all the courage to do the work that we needed to do. But it’s so important that you can just be in people’s backs and say, “I’m here,” and also to have cultural practices built into what we do, so that that support is there, if anyone needs it.”

A forgotten thriller explodes on Netflix