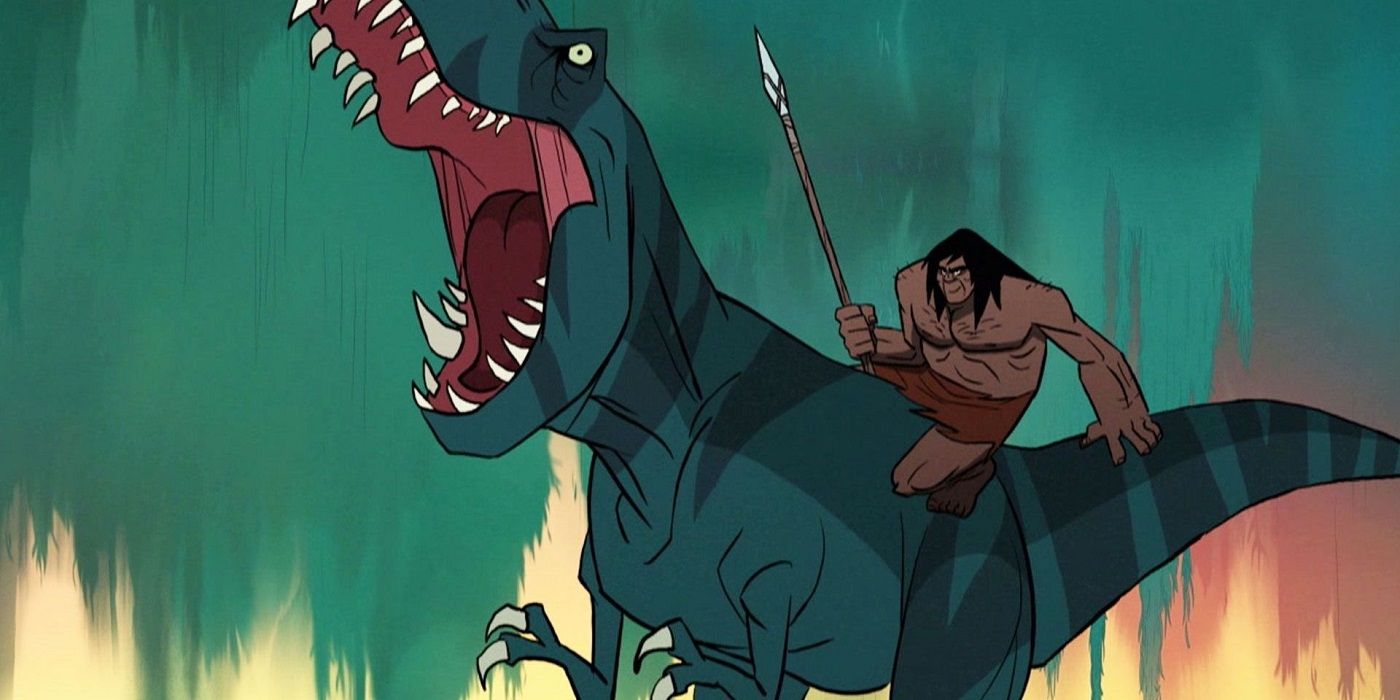 The second season of Adult Swim’s frenetically violent animated action-adventure series, Primal by Genndy Tartakovsky, just received a new trailer. The show will return to Adult Swim later this month and will also be available to stream on HBO Max. Primal by Genndy Tartakovsky is an acclaimed series set in a hypnotic prehistoric-like society and follows the symbiotic relationship between a Neanderthal and a Tyrannosaurus as they wander their strange world simply trying to survive. Aaron LaPlante provides nearly all of the voices for the show. The series was notable in its first season for seamlessly combining many genres including action, adventure, drama, fantasy, horror, and thriller.

The brief 45-second trailer opens with rave reviews for the first season, with ComicBook.com hailing it as an “intense, powerful, and brutal masterpiece.” The first clip of the new season of this hidden gem of a show is a beautifully animated shot of Fang le Tyrannosaurus jump through erupting volcanoes. This shot is followed by text saying that the first season won five Emmys. The teaser then erupts into an abrasive showcase of snippets from the show’s second season, including flashes of intense violent action that’s sure to excite fans and bring in new ones as well.

The first season of Primal by Genndy Tartakovsky premiered in October 2019. A film which chronicled the first four episodes of the series was later screened in Beverly Hills later in 2019 under the title Primal: Tales of Savagery, and was also submitted in the Best Animated Feature category for the 92nd Academy Awards, although it never received an actual nomination. The first season was split into two parts, with the second part airing in Fall 2020. The first season received critical acclaim and received numerous accolades including an Emmy for Outstanding Animated Program. The show currently holds a rare 100% Fresh score on Rotten Tomatoes.

film composer Tyler Bateswho is known for composing many horror films, including Rob Zombie’s Halloween and its sequel, as well as Dawn of the Dead by Zach Snydergives the score of Primitive next to Joanne Higginbottom. Bates also scored all John Wick movies.

Genndy Tartakovskywho created and directed Primitiveis an animation pioneer who has worked on many successful shows, including The Powerpuff Girls, Dexter’s Laboratoryand samurai jack. Tartakovsky also directed the first three films of the Hotel Transylvania franchise and is currently slated to direct the next films Fixed, dark knightand popeye.

The first episode of Primal by Genndy TartakovskyThe second season of will premiere on Adult Swim on July 21 at midnight before becoming available to stream on HBO Max the following day.

Check out the trailer below: