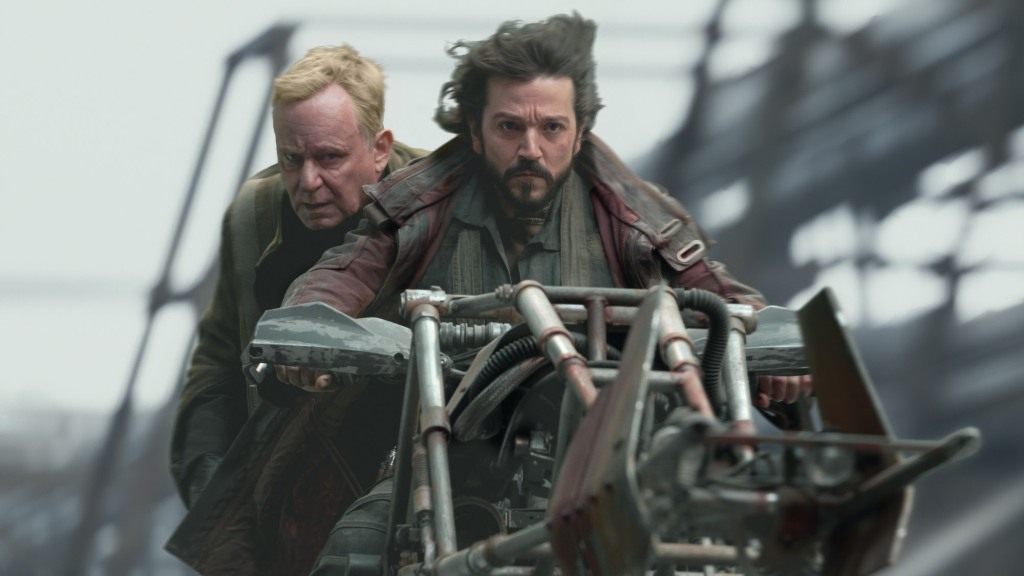 Tony Gilroy didn’t want to make a prequel to “Rogue One”. The 2016 feature “Star Wars,” which Gilroy co-wrote, is itself a prequel, detailing how a team of ragged rebels, led by spy Cassian Andor (Diego Luna), steals the plans of the ‘death Star. They succeed, but (spoiler alert!) they all sacrifice their lives to do so – an unusually austere ending for a “Star Wars” endeavor. Production was also sadly troubled, with Gilroy, who wrote four “Bourne” films and directed “Michael Clayton”, stepping in to helm numerous reshoots in place of director Gareth Edwards. When the result was a massive hit, grossing just over $1 billion worldwide, Lucasfilm president Kathleen Kennedy was eager to make more “Star Wars” films with Gilroy.

Gilroy, in other words, had no interest in doing another big space saga and moved on. But in 2018, Lucasfilm began developing a TV series set before the events of “Rogue One,” following Cassian’s life with his loyal droid K-2SO (Alan Tudyk). Gilroy was not involved, but the studio sent him the script. “It was in the vein of Cassian and K-2 are like Butch and Sundance, and they’re going to storm the Citadel,” he says. The hardware was good, he adds, “but very difficult to maintain over the long term.”

So, while still showing no interest in the work, Gilroy wrote “a lengthy forensic manifesto” to Lucasfilm that not only explained why he thought this approach wouldn’t work, but what he thought the studio should. do instead. “It was such a crazy idea,” he says with a broad smile. “It was so radical, so out there.”

This idea was “Andor”. The 12-episode first season, set to debut on Disney+ on September 21, is indeed unlike anything attempted before in the “Star Wars” franchise’s 45-year history. Rather than turning Cassian’s pre-“Rogue One” life into a wild space adventure, Gilroy – who wrote five episodes and serves as executive producer and showrunner – uses Cassian’s story to portray, in almost à la Dickens, the intertwined lives of ordinary people. as they orbit the Rebel Alliance formation. As legacy characters like Mon Mothma (Genevieve O’Reilly) and Saw Gerrera (Forest Whitaker) appear, the vast majority of the 200+ cast in the ensemble play new characters, often inhabiting worlds we never have. seen before. More importantly, rather than wayward Jedi or secret Skywalkers, “Andor” follows lowly factory workers and mid-level technocrats, seemingly mundane characters who have long hovered in the background but never been put in light so far.

“I wanted to do it on real people,” says Gilroy. “They did all this IP on the Royal Family, basically. It was great. But there are a billion, a billion, a billion other beings in the galaxy. There are plumbers and cosmeticians. Journalists! What are their lives like? The revolution affects them as much as anyone else. Why not use the “Star Wars” canon as the host organism for absolutely realistic, passionate and dramatic storytelling? As for any other legacy characters that might appear in Season 1, they are, Gilroy says, “never fan service.”

It was precisely Gilroy’s ground-level approach that convinced Luna to return to play Cassian again (he’s also an executive producer). “It’s the articulation of a rebellion,” says the actor. “It’s not about a character who saves everyone. It’s a matter of community.

This broader perspective surprised Kyle Soller (“Poldark”), who plays Syril Karn, an unofficial assistant inspector who clashes with Cassian. “It was completely different from what I expected the ‘Star Wars’ scripts to look like,” he says. “I had to go back and look at the title: No, this is ‘Star Wars.’ I just thought, ‘Wow, this is incredibly grand, grainy, messy.'” At one point, he adds, Syril comes home “and spends time with his mother, which is so anti-‘Star Wars’-y.”

Making a “Star Wars” show on this scale, says Gilroy, was only possible because of the “streaming economy,” which he exploited to its full advantage. Rather than filming inside the ‘volume’ – the state-of-the-art soundstage filled with LED screens that ‘The Mandalorian’, ‘The Book of Boba Fett’ and ‘Obi-Wan Kenobi’ have all largely used – the series’ ambitious storytelling required filming on real locations and sprawling sets built entirely in London.

“I imagined that I was either going to be on a green screen or that I would have been in front of a virtual set”, says Adria Arjona (“Morbius”), who plays Cassian’s friend Bix, a mechanic on the planet Ferrix. . “They created an entire city. Ferrix actually exists. I was there.”

When Denise Gough, who plays Imperial Security Agent Dedra Meero, first filmed on Ferrix’s set, she was equally impressed. “There was what looked like a sushi bar, and I looked in one of the bowls and there were blue noodles,” she says. “The next one was a skewer with some kind of weird animal on it. I was like, ‘Wow, nobody will see that. It’s all for us.

These sets include everything from lavish homes to luxury brothels to housing projects, all designed to help ground the storytelling in relatable human complexity — and draw viewers beyond “Star Wars” faithful.

“You should be able to watch the show and never worry about ‘Star Wars,’ or [have ever] seen any ‘Star Wars,'” says Gilroy. “This show should work on its own.” In the same breath, however, he adds, “The hope, the dream, is that the really hardcore ‘Star Wars’ community will embrace the show in a new way – that they’ll be thrilled that someone walks in. and completely without cynicism molecularly descend into their world and treat it like the real thing.

Lucasfilm’s first three “Star Wars” shows for Disney+ were deliberately designed for family viewing, with simple plots and kid-friendly characters – in line with just about every other “Star Wars” venture since the George Lucas’ original 1977 film. “Andor,” however, approaches its story with a level of mature emotional sophistication and narrative complexity that sets it apart.

“I don’t think it’s a show for 9-year-olds, probably,” Gilroy says. Which isn’t to say the series doesn’t embrace its “Star Wars” roots. “We are an adventure story,” he adds. “We are a thriller. And very abundantly, we create a lot of intellectual property. Some are at ground level: products and TV shows, all kinds of things. They are all new.

This turned out to be much more tedious than Gilroy had originally anticipated. “I thought to myself, ‘I’m going to build the first season, set it up and launch it, and then someone else can pick it up and do it,'” he says. “It wasn’t really doable.” Capturing the granular circumstances of everyday people in the “Star Wars” galaxy – from the cereal they eat to the jewelry they wear – meant that every detail had to be designed, approved and crafted.

“There were many times along the way where it was like, ‘Man, what did I do with my life? Said Gilroy. “‘Why did I do that? It just can’t be worth it. It’s a tough conversation to have with yourself when you’re in it.’

Things got particularly dire when Gilroy realized he had created a seemingly impossible dilemma for himself: “Andor” begins five years before the events of “Rogue One”, and Gilroy’s plan was always to end to the series just before the events of the film. But season 1, which covers a year of Cassian’s life, took about two years to complete. Maintaining the series’ broad reach for four more seasons felt overwhelming.

“You just couldn’t physically do five years of the show,” Gilroy says with a groan. “I mean, Diego would be around 65. I would be in a nursing home.” He grimaces. “We were panicked. We can’t sign forever.

Next, Gilroy says that he, Luna, and executive producer Sanne Wohlenberg (“Chernobyl”) came up with “an incredibly elegant solution” that took advantage of the structure they had adopted for season 1, in which a single story takes place over three concurrent episodes written and directed by the same team. (That’s why Disney+ is showing the first three episodes together.) In November, “Andor” begins production on a 12-episode second and final season, and each three-episode block will cover a discrete number of Days in the Life. of Cassian in a single year.

Luna adds, “’Star Wars’ develops in a way that allows it to have different expressions. We are not part of a saga that does not end. Our end is clear. It’s as clear as an ending can be.

This will also mark the end of Gilroy’s time working in a galaxy far, far away. He’s gone from his early moments of desperation to feeling ‘proud’ of ‘this huge, bespoke kind of thing we’re trying to do’ – and possibly revolutionizing the way audiences think of ‘Star Wars’ in the world. process.

As one character on the show puts it, “Everyone has their own rebellion.”